This terrifying treat is the book of the dead, in cake form, and bound in chocolate icing instead of human flesh.  You might even call it the NecroNOMicon.  Maybe.

I started with a basic devil's food cake, of course, and iced it with vanilla and chocolate buttercream icing.  I used a combination of marshmallows and layered icing to make the facial features, and then poured some melted dark chocolate (mixed with a little milk and instant coffee) into the craters of the eyes and mouth.  I then unceremoniously hacked at it with a toothpick to give the icing some texture. 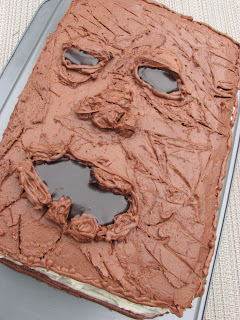 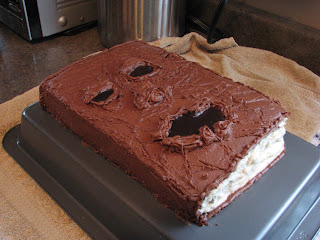 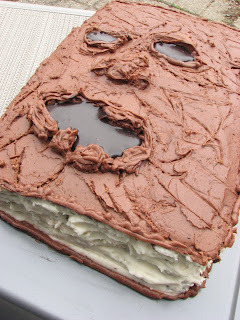 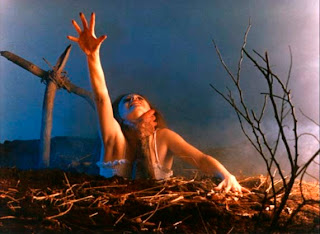 This cake was inspired, of course, by Sam Raimi's The Evil Dead (1981).  In fact, you should be thanking me, because there are many moments in the film that could have made for some truly unappetizing food.  And by that, I mean there's some spectacular gore.  Demonic possession, rotting body parts all over the place, oatmeal oozing out of shirt-sleeves!  The special effects are so creative and weird you'll have to pick your jaw up off the floor when it's over.  This is a great example of fun horror.  It's just so creepy, insane and hilarious!  I haven't met anyone who hates it.  Just watch it.  But you might not want to be eating anything while you do.

Really though, this is a film for people who like horror movies.  If the trailer offends you, the movie will as well.  You've been warned.

Join us!
Posted by creepycookie at 10:41